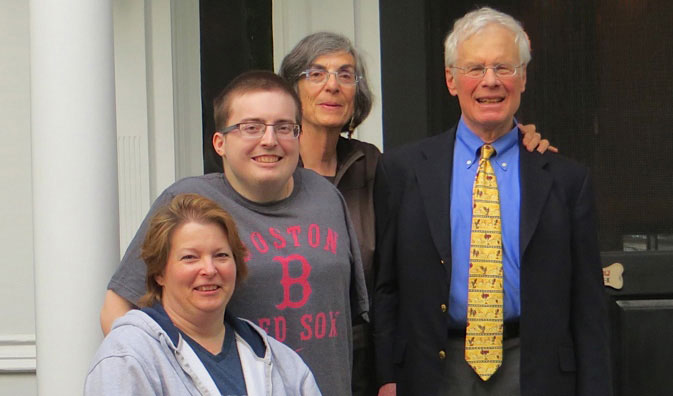 The Lodish Family Attends Wedding of Their Guest 28 Years Later

Jodie Knutson remembers the first time her family arrived at the Brookline home of Pam and Harvey Lodish. Her two young sons, Ben and Josh, tore out of the house with Pam and Harvey’s daughter, Stephanie, and ran down the street to the local playground. Strangers until that very moment, the families were instantly connected.

“It was just like that, they kind of took us in and since then they have always been that second family to us,” says Jodie. “My dad’s an Iowa farmer and I think he said it best. He said to Pam, ‘you’re the nicest strangers I’ve ever met.'”
“I still remember all those years ago, we took an Angel Flight to Boston and within five minutes, the doctors were able to answer questions about Ben’s health that we had had for the first two years of his life,” says Jodie. “Boston is where Ben’s team is. We trust them. We wouldn’t go anywhere else.”

Ben was diagnosed with Klippel-Trenaunay Syndrome (KTS), a rare congenital vascular disorder associated with the overgrowth of blood vessels, soft tissue and bones of one limb, most often the leg, though in Ben’s case it affected his left arm and torso causing a great deal of pain and reduced movement.

“When you’re away from home and your own support system, you’re lost, you really don’t have any idea what you’re doing. You just fly by the seat of your pants and hope you make the right decisions,” said Jodie.

“Pam and Harvey have opened their hearts and their home to us. They’ve always been there to say, ‘how’s it going today?’ or to help us get our minds thinking about an upcoming appointment, or to offer a ride when it’s raining. No matter when, they’ve said if you need us, give us a call.”

Pam said, “Jodie is right, she and her husband Steve, and her sons, Josh and Ben are a part of our family. We have watched their dedication to helping Ben find the best care for his medical situation. And helping families, such as the Knutsons, has helped us teach our children, and now our grandchildren, a valuable life lesson – that reaching out and helping families from afar, is not that big a deal and really doesn’t take much work – just a clean room and a house key, plus some basic clues about how to get back and forth to the hospital.”
This year’s trip to Boston was once again for surgery. After years of doing everything possible to save his left arm, Ben agreed with his medical team that it was time to amputate. “It’s something that my doctors have been talking about since I was little,” said Ben. “It became clear to me that things would only continue to get worse, so amputation was the right choice.” “Ben has been incredibly courageous and patient with this malformation, which has caused excruciating pain. He has endured enough pain and discomfort for several lifetimes,” said Upton. “What a kid!”
“It’s always hard to put into words what we’ve gone through,” said Jodie. “We’ve had something that has totally changed everybody’s lives in our family, but we’re blessed with the people we have come in contact with at this hospital and in this community.

After Ben was discharged, he and his mom spent one more night with Pam and Harvey in Brookline before heading back to Iowa. As thankful as he continues to be for Pam and Harvey’s gracious hospitality, Ben was more excited to be going home. There was a slow pitch softball competition he was hoping to attend, and he said, he could use a little quiet time away from the city crowds. “Yeah, it’s been a long three weeks.”

Ben is now 28. Over the past 27 years he and his family have traveled multiple times to receive specialty care at Boston hospitals, starting as a toddler at Boston Children’s Hospital and since Ben’s teen years, under the care of Dr. Joseph Upton, a plastic surgeon at Beth Israel Deaconess Medical Center.